​Floyd has opened for and performed with a variety of poets and other artist such as the legendary "The Last Poets", the legendary late Gill Scott-Heron, Dahveed Nelson, Malik Yusef, singer Goapele and Maya Azucena.

He has created and released his own line of greeting cards called "PoeticByDesign", but his most recognizable

project is the launch of SpokenVizions Magazine (3x National Poetry Awards Poetry Magazine of the Year) and SpokenVizions.com, where he serves as the editor and designer of the publication.  Recently, he has launched SVY Magazine (SpokenVizions Youth Magazine. 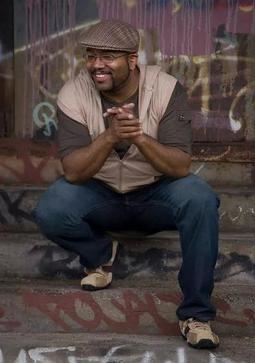 Floyd Boykin Jr. is a poet, author, recording artist, musician, producer and lupus awareness advocate.  He is the founder of SpokenVizions Entertainment Group, LLC and the producer of Project L.I.F.E. (learning information for existence).  His primary instrument is the bass guitar, but he also plays the flute, the keyboard and a little percussion.  In addition to his book "Create Me A Better Me:  A Conversation About Self-Transformation", he is also the author of four poetry books:  "Poetic Bliss with Lyrical Rhythms", "Bare Essence:  The Soul of Me", "Waiting To Dance with Her Spirit" and "Poetry is a Goddess Walking on Earth: Volume One".

and "W.A.R. on RedMoon7".   Floyd is currently in the studio working on his fifth studio project.

He has been nominated for 2 National Poetry Awards as an artist and he has won one Spoken Word BillBoard Award.